With two Certified Master Chefs, the 146-year-old Cleveland club is elevating its dining program and the level of professionalism within its staff.

When Arnaud Berthelier, Executive Chef of the Union Club of Cleveland, successfully passed the American Culinary Federation’s Certified Master Chef (CMC) examination this past February, he propelled the 146-year-old city club into the spotlight.

“We are the only private club with two Certified Master Chefs on staff,” says Lawrence McFadden, CMC, General Manager and COO, who passed the same examination in 2001 and came to the club in 2015.

Berthelier runs the culinary operation. McFadden runs the club. Together, they are elevating not only the caliber of the Union Club’s food-and-beverage program, but also the level of professionalism within its staff. 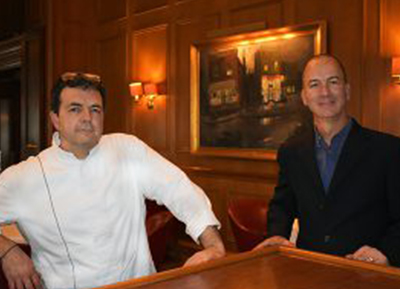 Arnaud Berthelier, CMC, (left) and Lawrence McFadden, CMC, are elevating the Union Club’s dining program as well as the level of professionalism within its staff.

At that time, the chef who had been with the club for nearly 20 years decided to move on. McFadden then began looking for a new chef, which led him to Berthelier.

“I wanted someone for whom cooking was not just a job—but a passion,” he says.

Berthelier had been working at The Everglades Club in Palm Beach, Fla. as the Executive Sous Chef. He was in the process of preparing for his CMC certification.

“Chef and I worked together years ago at the Ritz,” says McFadden. “He’s an incredibly talented culinarian with a lot of integrity. I knew he would be able to transform our culinary program.”

“I trust [McFadden],” says Berthelier. “He will invest in me if I invest in the club.”

Berthelier arrived in October 2017 and spent the first few months getting his arms around the operation, while simultaneously studying and preparing for the exam.

“[McFadden] stressed the importance of the test,” says Berthelier. “He said that it needed to be my priority. So I introduced weekly specials and used them as a way to practice.”

All his hard work paid off. Berthelier passed in February and, armed with three new letters behind his name, began focusing on improving the operation.